I was warned about David Manning before I met him: “The moment you see him, you’ll know he’s family”. And so it was. Meeting up with someone, with whom you’ve had several past lives, is always a sweet homecoming.

It was 6 months after that initial meeting that David and I got to know each other. Following my London workshop last May, I invited him to visit Edinburgh, where I planned to vacation, so we could spend a couple of days together. We strolled around Old Town, dined on fine food, and indulged in esoteric conversations.

On David’s last morning in Edinburgh, we visited the Botanical Garden. Once we had surveyed all of the gardens, we sat on the grass for a while, chatting. Inspired by the surroundings, and knowing that David had done some landscaping, I told him about my property in Vilcabamba. “I’ve done everything in white, blue, pink, and lavender,” I explained. “I don’t have anything yellow.”

“Why,” he asked. “Yellow would be a lovely contrast.”

“Don’t like it. Too brash. I don’t want any yellow on the property.” 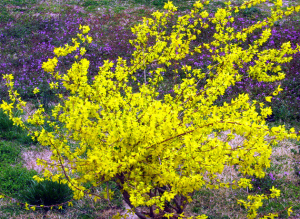 There was a long pause. “Let’s walk back to that last garden”, he suggested. “There’s a shrub with beautiful yellow flowers. Perhaps we can meditate on it for a few minutes.”

Reluctantly, I agreed. But I still wanted nothing yellow in my garden.

We did an open-eye, gazing meditation. After a half minute, I turned and walk away.

“I know what the problem is”, I answered over my shoulder. David caught up.  “I’m afraid of the next level of gold Light”.  We sauntered in the direction of my vacation flat. “The Light I have access to now is a soft, luminous golden hue. But the yellow flowers represent a clear, less obstructed, gold Light. And I’m afraid of accessing that Light; afraid to allow it to come through in a Transmission of Light to other people. It’s a fear-based process that, until now, I was unaware of.”

Back in my flat, David offered to do an energy session for me. We had previously done a session via Skype, so I knew what to expect: his clear psychic perceptions, a story line that animates your limitations told using the Sacred Voice, and piercing Shaman-like sounds that slice through your Being, eradicating illusions.

But in person, his session was even more potent. Near the end, he identified a construct that was holding my awareness in a limited configuration. As I listened to him describe it, then found what he was perceiving, I thought to myself, “I wonder what would happen if I just undid those 2 latches on either side of my awareness field?”

For the most part, on our spiritual journeys, our experiences are gradual and subtle and we long for those rare moments of intensity—particularly because we’ve been programmed to believe that ‘bigger is better’. That day, bigger was, indeed, better.

With the release of the latches, my awareness field exploded. A tsunami of awareness flooded out through the Universe. It was so intense that my embodiment was devastated. “Sorry I can’t help with the preparations for lunch”, I said, weakly from the couch. It took me a couple of hours to recuperate.  But once back on my feet, I had taken a major leap in consciousness.  And my work has reflected it ever since.

From that day in Edinburgh, as many of you know, I set about helping David make his energy work known to a larger audience. I hosted four of his amazing teleconferences last year. And I’ve invited him to join me for three 2016 Treasure Trove of Transformation Intensive Workshops, to be held in Berlin, San Francisco, and London.

So it is with great pleasure that I interview David this coming Sunday, 7 February. I hope you’ll be able to join us to experience David’s energy and to participate in an exploration of what goes on, behind-the-scenes, when David assists his clients in making leaps in consciousness.