This blog has been translated into Portugese, Spanish, Chinese & French.

Since the December 2012 Shift, a lot of people are talking about “fluidity”. It’s a fashionable, spiritual buzzword right now. But what does it really mean?

To answer that question, just look at your own life. Look for the opposite: rigidity. Look for places in your day-to-day life where you are holding onto a fixed idea, a belief system, an agenda. Look at what you are reticent to let go of. Look at where the energy in your life is stuck or what has just blown up in your face.

I’ll give you an example from my own experience: Five women just launched the A.W.A.K.E.N. Academy. We began work on it in November 2012. We created a structure. A good one we thought. It included the beautiful concept of a “Sacred Circle”, a ring of power where members of the circle are networked in an alternate dimension so as to accelerate everyone’s evolution. In November 2012, that was a pretty sophisticated, mystical concept, one that we had used successfully in a number of other collaborations, one that had served us well for thousands of years.

But on the December Solstice 2012, the paradigm of structure on planet Earth morphed into fluidity. By February, we began to sense that something was amiss. Things weren’t moving ahead gracefully. So we came together–in our five-some Sacred Circle–to have a look. After pooling all of our seeings, we suddenly realized that the very Circle we had deemed such an elevated structure was actually holding us back.

Immediately, everything shifted and we watched on the inner planes, in amazement, as the Circle spiraled up into an entirely different configure-less configuration. It was gorgeous! The energy was super-fluid. It was multidimensional. It encompassed the Earth, the solar system then went galactic. And yet, inside of this ever-spiraling fluidity, was absolute stillness. Wow! Everyone lapsed into meditation and didn’t want to stop. 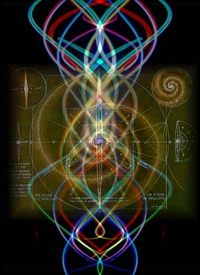 The important point here is this: in order to facilitate this new configuration, we had to be prepared to surrender our fixed idea, to give up our notion of what had worked in the past, to be willing to journey with divine fluid energies wherever they might take us.

It’s time for us to trust–trust the ever changing, morphing, newness of what is available to come through us. We need to scrutinize our lives and be willing to play the What-If game: What if we let go of the Sacred Circle? What if I let go of this relationship? What if I dropped this project that isn’t working? Then see where the energy moves us.

You don’t need to understand the concept of fluidity to ascend with the planet. Just remove the points of rigidity in your life and the fluidity will take care of itself.